Taking a stroll in Vauxhall Gardens

Vauxhall Gardens first made its appearance as Spring Gardens back in 1661 and was developed into its heyday by the manager Johnathan Tyers and his son in the eighteenth century. 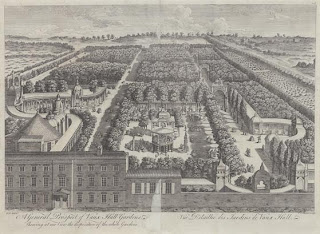 ﻿﻿ You traditionally arrived by boat, paid your shilling entrance fee, then entered into a magical world of illumination and excitement. It was seen as a rite of passage and young people pined for the day that they could tell their friends they had been to Vauxhall. It was the one place where some rules were discarded and you could talk to strangers. You could buy rack punch and stroll in the 'dark walks' where men and women could meet without being seen. For the more respectable you could buy supper, listen to music and promendade, allowing yourself to see and be seen, leaving before things got too raucous. The aristocracy and nobility rubbed shoulders with the middle classes, who were aspiring to a better standard of life through politeness and elegance. In short, anyone who was anyone had to go.


Vauxhall was indeed a special garden, in that the twelve acre site enclosed avenues of trees, birdsong, a variety of walks and a cascade of water. However this was a garden like no other - here you were not hindered by mud or manure. Here was nature purposefully romantisiced into a rural idyll, full of images of pastoral nymphs and songs of happy swains. It was like real nature, only better.

It must have been quite a sight. This was a time before street lighting and where you could not socialise outside after dark. Outdoor urban activity in the hours between sunset and sunrise were limited to prostitutes, students and thieves. Yet Vauxhall was only open on summer evenings and so offered the chance to chat to friends and strangers after sunset under the magnificent illumination of hundreds of lamps. Vauxhall truely colonised the night.


Music and art were important features of Vauxhall. Rather than hearing entire operas, here the most catchy arias and popular ballads were sung and the sheet music could be then purchased so you could play the Vauxhall songs at home, making the experience and memories last even longer. Love songs and patriotic arias were particularly popular. In addition, quaint pastoral paintings by Francis Hayman adorned the supper boxes and a statue of Handel was displayed, being the first public statue of a living composer. The performance of vocal and instrumental music was also crucial to keeping the atmosphere cultured and refined.

In all, a visit to Vauxhall would have been truely an impressive experience in Georgian London.

Nicky Pink
Hampshire, United Kingdom
Having worked in archives and country houses for over ten years, I lecture on eighteenth century country houses and gardens. I gained a Masters in Eighteenth Century Studies from the University of Southampton where I was awarded a first, and am a semi-professional singer, specialising in Regency domestic music